“ZeroZeroZero” – a dramatic television series based on the eponymous work of the Italian writer Roberto Saviano published in 2013 and in the shortest possible time became a bestseller. In general, Roberto Saviano gained world fame after his debut novel of 2006, written by him in the form of a reportage “Gomorra”, based on which, director Mateo Garrone shot the film of the same name that received an Oscar nomination and created the same series. Behind Roberto Saviano’s head, a real hunt began, as the Italian mafia-afflicted organization known around the world as Camorra, outraged by the novel, signed him a death sentence.

The number one global issue is terrorism and drug trafficking. The protagonists of this series are people who work on the implementation of numerous operations that should suspend the activities of groups in the countries of South and North America, as well as in some European states.

True, one has to deal with truly dangerous groups and people who have been engaged in criminal activities for many years. Mexican cartels are not so bad when there is also the Italian mafia, Calabrian associations and numerous loners, whose capture is also a priority. 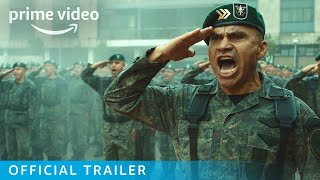 Manhunt: Unabomber
7.7
The focus of the plot of the new series is a simple guard Richard Jewell, who became a real hero when he stopped a terrorist who ...

Step Up: High Water
7.5
Sister and brother Bakers love to dance. The young man Tal is keen on ballet dancing, and the guy is doing well and reveals his talent. ...