The London Underground is a large and extensive network. The plot focuses on the story of surgeon Daniel, who decided to hide a private clinic in one of the abandoned tunnels. Various patients come here illegally to be treated, among whom there are extremely dangerous individuals.

It is here that criminal authorities receive medical attention, if necessary. True, Daniel is not one of the bad guys. He is ready to go against the law only because he wants to help his sick wife, who needs an expensive operation. Will he be able to earn money and not fall for the hook of representatives of power and law?

The English actor Mark Strong (Sherlock Holmes, Stardust, The Simulation Game, etc.) tried on the image of surgeon Daniel Milton in the television drama series Temple, commissioned by Sky One, which is practically accurate adaptation of the Norwegian television series Valkyrie with Sven Nordin in the title role.

Daniel Milton is a surgeon and provides medical care to anyone who is willing to pay big money for this. His regular patients are mainly the subjects of the criminal world, who often need help of a surgical nature. Daniel created in an extensive, abandoned network of tunnels near the London Underground not far from Temple Station located on Victoria Embankment in Westminster, an underground clinic bordering London.

Insurmountable circumstances forced the man to do this. His beloved wife, Beth Milton, suffered from an incurable disease, and expensive drugs were needed to sustain life in her body. In addition, you need to pay for an equally expensive life-support apparatus, thanks to which, Beth was alive for a long time. But Beth herself, who was also a doctor and was engaged in the study of her illness, is already ready to voluntarily die. However, the husband did not believe that her illness was incurable and he, against the will of his wife, placed her in his underground clinic.

Lee Simmons, an employee of one of the transport companies and a friend of Daniel, helped the surgeon create this clandestine medical center in which Daniel conducts operations for criminals who need them. In addition, there is also Anna Williams, she is also a medic and is not only Beth’s faithful friend, but also Daniela’s former lover. Anna helps a former lover with his underground clinic.

The story in the TV series “Temple” begins with the fact that one man was injured, who, after being stopped by the police, refused to get out of the car. Not only that, he also shot down one of the policemen and disappeared. The criminal called his friend asking for help. This acquaintance was Lee Simmons, who without hesitation rushed to the aid of Jamie and brought him to Milton. The wounded robber was in such a deplorable state that he revealed to Simmons where the bags of money left by him lay.

How this story will end, you can find out by watching the online English version of the Norwegian series, the television drama television series “Temple”. 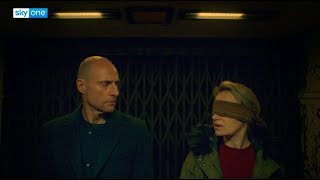 Queen of the South
7.9
The main character of the series Teresa spent most of her life in Mexico. She has to leave her home country after her friend is killed. ...

In the Dark
7.3
The project “In the dark” is a completely new and incredible story telling about the life of a girl who lost her sight, but did not ...

The ABC Murders
6.6
Before the audience, one of the most striking and inventive adaptations of the work dedicated to the investigation of the detective genre recognizable by many fans, ...