The protagonists of this series are trying to find themselves in this life. They firmly connected their fates with music, but for survival it is necessary to spin. Favelas are not so simple as they might seem at first glance.

Trinity of the main characters is passionate about funk, but this music is unlikely to make them a lot of money. Guys know that they can save themselves and their loved ones if they begin criminal activity.

They find themselves in the spotlight of the drug business. Ahead of them awaits the interweaving of various events related to personal life, religious views and moral principles. Enjoy watching.

We present to your attention the Brazilian multi-part crime drama “Like-minded People” from the screenwriter and director Conrad Dantas, better known under the stage name Condzilla, or simply Cond.

Conrad is the founder of the Kondzilla Records music company, a producer of video and sound recordings, which in Brazil is considered a popularizer of the Brazilian musical style created in São Paulo in 2008, Funk ostentação. The themes of this musical style are cars, motorbikes, spirits, women and a crazy desire to leave the favela in the past, having achieved its desired goals.

The dominant lyrical themes of this musical style in Rio de Janeiro were crime and a lack of social justice, but Conrad Dantas, who currently owns the largest YouTube channel in Brazil and Latin America, and the second largest music channel in the world, with over 50 million subscribers and more than 25 billion views, who took an active part in music festivals, first launched the video clip MCs Backdi and Bio G3 in mid-2011, and after that, when the fans accepted this piece with a bang, I thought about the production of an almost full-length, art series – Like-Minded People, dedicated specifically to the topic of young people trying in any way to get out of the Brazilian slums formed in cities in Brazil in the 19th century.

In fact, Conrad told in his series about his life and this is a kind of autobiography. The guy was born, like the heroes of the film, in one of the cities of Sao Paulo. Mom was a teacher, dad a mason. They tried to do everything possible so that the son could get an education and break out into people. When Conrad was 18 years old, his mother died, leaving him significant financial insurance savings, and he then worked as a web designer at the University of Santos. The young man used this money to buy a Canon EOS 5D camera and pursue a career in video production. Dantas later moved to São Paulo, where he studied cinematography, post-production and photography.

The heroes of the film did not follow in the footsteps of its creator. They are musicians, but the musical style that they play is not very conducive to moving up a career. Thinking about fame and popularity, for some reason, the guys came to the conclusion that only with the help of crime would they be able to get out of the slums into secular society, while not parting with their musical preferences and promoting their style. But even by contacting the crime, you cannot be sure that you can achieve the goal, especially if you get in touch with the world of drug trafficking. This path leads either to the grave or to jail. 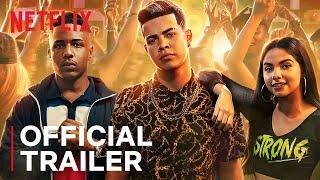 Mr. Iglesias
7.1
Mr. Iglesias is a cheerful and good-natured history teacher in high school. He adores his alma mater and students, many of whom are gifted, but confused ...

Turn Up Charlie
7.2
The main character is a DJ and an avid bachelor Charlie (Idris Elba), who is going through difficult times. Suddenly, he gets a chance, perhaps the ...