Project Blue Book season 1 is one of the freshest TV productions from the History Channel. The plot sends viewers in the fifties of the last century. The plot focuses on the astronomer John Allen Hynek, who, along with the captain of the United States Air Force Michael Quinn, is investigating strange documents indicating the appearance of unidentified flying objects in the sky. Are all alien stories really true? Or is it someone’s tricky game? In the course of the investigation, the main characters come out to people from the government, between whom there is a relationship of trust. It seems that they conspired, misleading many. But what is the truth?

John Allen Hinek worked for a long time as an astronomer. He never saw anything unusual in space that he could not explain. The main character is sure that there are no aliens, but at work he has to question his views from time to time, because the man works with US Air Force captain Michael Quinn.

The scientist and the warrior are engaged in investigations of strange cases that fell into documentary examinations. Many documents indicate that numerous representatives of alien races sometimes appeared in the skies over America.

Unidentified flying objects even managed to photograph, but to prove their belonging to intelligent creatures did not work. What is the peculiarity and meaning of what is happening? Will the main characters manage to cope with such strange investigations? 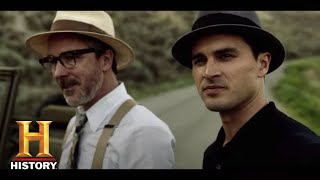 The series features outstanding actors and great writers in order to tell a very interesting semi-fictional story about the history of UFOs. This topic has been quite important for many sci-fi fans all over the globe. We love the idea that some aliens visited us before. It is a fascinating fantasy that consumed many minds and even drove some people crazy. This show wants to explore this topic deeply and mix the reality with fiction in order to make the whole narrative a little bit more compelling to casual audiences. If you are into authentic pseudo-documentaries, you will love this amazing piece of television!
Project Blue Book season 1 demonstrates some of the best qualities a good show could have: good writing, interesting characters, strong visual effects, and truly interesting story bits. The premise itself is more than enough to interest some viewers. We haven’t seen a good UFO show for a long time and the audience is craving for some good series about this particularly interesting topic. The presence of Aidan Gillen definitely adds to the charisma of the cast and makes it much more appealing for people who enjoy fictional TV shows. It is a great documentary to watch online! 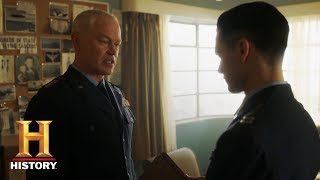