The project “Medical Police” is a fascinating story about how representatives of a medical case have to work in a foreign country. Lol Splatt and Owen Maestro go to Brazil to try to help the locals.

Ahead of the audience there are ten exciting episodes telling about the adventures of professionals in their field. They have to plunge into exciting and fascinating events, which combine adventure motives, dramatic twists and turns of history and much, much more.

Medical Police is an American series in which the authors created an incredible mixture of genres from medical chronicles, combined with police chronicles, a scientific apocalypse with the danger posed by a deadly virus of unknown origin, as well as comedy.

The beginning of the action takes place in a warm and sunny, but at the same time very powerful in terms of economic development of Brazil. One of the main drivers of the South American continent.

In one of the largest megacities of this country, Sao Paulo employs Owen Maestro and Lola Sprat. They are talented doctors and scientists who have been dealing with the problems of virology for a long time, which is a very urgent problem for Latin America, given the humidity of the climate and the sufficiency of heat, since it is in these conditions that all sorts of pathogenic organisms multiply and mutate, including viruses.

And this tandem of highly qualified specialists is just solving the mechanisms of the origin of all kinds of dangerous viruses. At first, they worked for a long time in a small children’s hospital, where they devoted all their energy to restoring the health of unfortunate children. However, suddenly they discover a completely terrible virus that threatens to destroy the entire American continent, and possibly all of humanity as a whole.

Somehow, the United States Government, who is also concerned about the threat, learns about the achievements of these two scientists, and they are invited to take part in the disaster prevention operation as special agents of the American special services specializing in the prevention and prevention of threats of this type. Of course, the heroes could not refuse such an offer and soon found themselves in the territory where the American military base is located strictly classified. There they are provided with all the technological capabilities in order to solve this puzzling task.

A couple of scientists perfectly understand the whole burden of responsibility that fell on their medical shoulders, and are actively taking up work to invent a vaccine in the shortest possible time, which can save people from this new invisible enemy, carrying a terrible death.
Their work brings different results, from some tragic consequences to heroic efforts to neutralize a new and almost uncontrollable strain. However, life is life, and in the process funny situations arise. 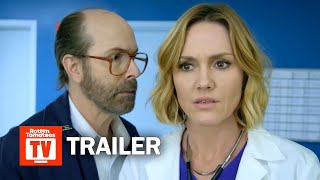 Big Mouth
8.0
Teenage transition age. For some, this phrase sounds so scary and frightening that they begin to build plans for either their own life or raising their ...