The second season of the series “Knightfall” will continue the story that unfolded at the beginning of the fourteenth century. In the autumn of this year, the famous persecution took place, organized by Pope Clement the Fifth, who declared the Templars traitors and sent punitive detachments to look for them.

The main enemies of the church were burned at the stake and persecuted throughout Europe and beyond. Philip the Fourth, king of France, joined such radical actions. The story also introduces the audience to Sir Landry, a man who accepted his fate: he is one of the leaders of the Templar movement, who does not agree with the actions of the Pope of Rome.

The main character will try to organize a free life for his comrades in the Holy Land. However, it seems to him that there is no meaning and hope for a better future. True, it is possible to perk up when it becomes known that new wakes of the Holy Grail were discovered by his wards.

From this point on, no papal troops are no longer scary, because the Templars are on the verge of the greatest discovery in their lives. What will be next? Not yet known! The second season of the story of the fall of one of the most influential orders of his time will continue this exciting and mysterious story!

It would seem that during the nine hundred years that passed by, the history of the Order of the Poor Knights of the Temple of Solomon was studied by various experts along and across, the benefit that evidence and documents remained in abundance, but various myths and beliefs still disturb the imagination of contemporaries endowing the Order masters with mysterious power, secret missions and magical artifacts.

The second season of the series “Knightfall” will continue the previously selected plot line, consisting of the basis of real historical events with the participation of authentic people of that time and a finely woven thread of artistic fiction with possible participants, which makes the project script more dynamic and action-packed. The filming of this series was conducted on the ancient streets of the cities of the Czech Republic, where the buildings of ancient castles are preserved, and the scenery of specific places were lined up with enviable realism. The actors, playing knights in full vestments, at first had to be not easy because the armor weighed more than 20 kilograms, but over time they gained stamina and a fitting hefty gait.

The first season of the historical series “Knightfall” told about the main plot plot of the Holy Grail, which was lost by the Knights Templar after the battle of Accra in 1291. Fifteen years later, events lead viewers to Paris, where the Order’s headquarters are located and Master Sir Landry comes to the fore, whose fate is mysteriously connected with this ancient artifact. At his birth, a mystery crept in that the mother hid all the years of his life. As a boy, he was found and brought up by one of the famous Knights of the Order, from childhood he knew all the points of the statute and was close to the royal court, becoming a friend of the French king Philip IV.

However, nothing human is alien to Sir Landry, he did not become a religious fanatic, carefully following the letter of the statute and leading an ascetic lifestyle. His passionate love for the Queen of France, Jeanne, received reciprocity and had consequences in the form of a newborn daughter, as well as the righteous anger of Philip IV Beautiful, who saw the deception and betrayal of two close people. The defeat of the Templar squad on the battlefield and the death of his own wife did not stop the rage of the deceived friend and husband, which served as the beginning of the end of the two hundred year organization of the Templars, with the full support of Pope Boniface VIII.

The name of the project “Knightfall” indicates the tragic end of the story about the Knights Templar, but also the series glorifies their courage and ability to fight, economic wit and worldly wisdom. The rulers, mired in debt to the Order, found their main sins before God and people, accusing the knights of worshiping the devil and self-interest, sodomy and debauchery. Many other “frank confessions” in the torture of the Inquisition were heard by judges after the trumped-up charges of bona fide citizens. Later, the clergy recognized their mistake, but the slander went down in history for a long time, and a day like Friday 13 still reminds of the mass death of people. 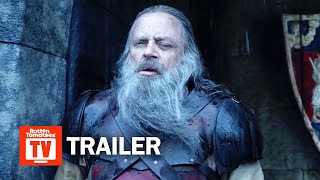 “Knightfall” is a series telling about powerful and brave templar who survived numerous persecutions from opponents and allies. Who would have thought that the Pope, who had assembled such a powerful army, would himself pursue his representatives with the aim of being executed for a betrayal that they did not commit.

A defeat in the Holy Land is a military failure, but there are no cowards and traitors among the Templar forces. People who dedicated themselves to serving the Order were loyal to Clement the Fifth and King Philip the Fourth. The protagonist of this story is the brave Sir Landry, who stands at the head of the crusading army.

With pain in his heart, he is experiencing the failure of the crusading army in the Holy Land. However, when information about the Holy Grail appears, hope in the heart of the protagonist again appears with faith in the best. 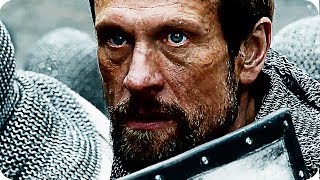