We present to your attention dear fans of horror and fiction television series “Dark / Web” whose action takes you on a mysterious and very dangerous journey into the cyber-crisis space in which our whole world turned out to be.

The center of attention will be a talented, not even a brilliant girl programmer named Molly Solis, although the main action of the series will revolve around her friends, who will be knocked down looking for her friend. Molly, despite her age, was an excellent cyber analyst and then, one day, the girl disappeared as if she had never been.

The disappearance of the girl greatly aroused her old friends, who threw all their affairs and rushed to find Molly. Among the friends of Molly, who was not indifferent to the fate of the girl, were one rather well-known journalist, a superstar of social networks, a college teacher and a computer hacker (though not as advanced as Molly).

And the guys came together because soon after the girl disappeared, they began to receive emails from Molly to the post office. These messages appear as short stories-stories and soon the friends of the missing Molly began to realize that these were not just messages, they were some kind of clues-a guide to how to find and help a girl before it was too late. If you do not take action, then soon, in the real world, which itself goes to destruction by leaps and bounds, a global crisis will begin associated with cyber attacks on all fronts, and technological progress will become even more extreme and deadly.

The first ominous story will be Ethan, who was recently fired from his job. The letter told about the driver. Sam got the second story and the content of this message made Sam turn to Ethan for advice. The third recipient of the sinister message was another of their common friends, James, who at first dismissed everything, because he already had “worries full of mouth”, he had to look after his sick mother, but then he joined the growing team.

The guys, following the prompts, soon found themselves in Texas and here, new circumstances were discovered indicating that not only Molly was in trouble, but all of them, together, as well as almost everyone who was somehow connected to the Internet. How to complete this exciting story, you will find out if you leave all the cases, join the online viewing of the fantastically terrible series – “The Dark Network”. 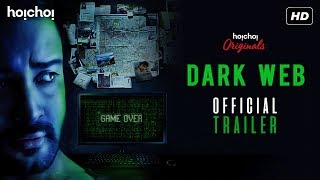 Bosch
8.4
TV show Bosch was given a life by true fans who awed at the first pilot episode featuring a very good backstory for the main protagonist ...